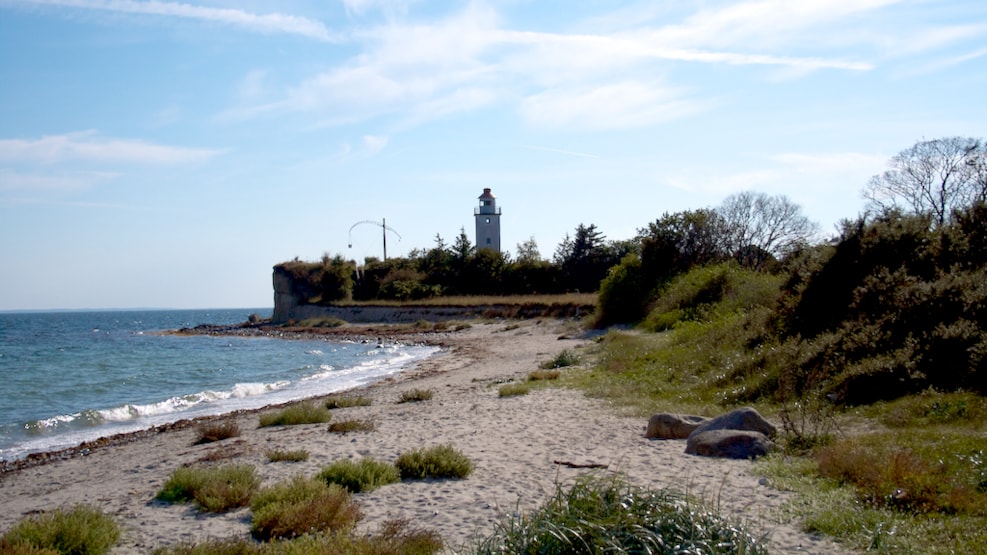 This is an incredibly scenic area offering some lovely walks. It is home to a wealth of birds, animals and unique flora thanks to Østerø Lake. Be sure to visit “knaldfyret”, the lighthouse and the Great Belt Bridge itself. The area is most definitely worth a visit.

The peninsula at Knudshoved is formed from sand and gravel, eroded from the coast north of Nyborg and carried southwards by the current, where the material was deposited, forming a peninsula. The lake and the surrounding salt meadows are important breeding grounds and foraging territories for many ducks and wading birds. The waterholes in the salt meadows also provide habitats for amphibians. Rare plant species, such as hairy smotherweed, Dianthus superbus (fringed pink) and sea rush, grow in the salt meadows, and heather is found in higher areas.

The bird watching tower at Knudshoved

A nature path leads from the car park to the bird watching tower by Østerø Lake, so you can walk there without disturbing the birds. There are posters in the tower showing the birds you are most likely to see, including black-headed seagulls, common terns and avocets as well as a large number of ducks, swans and geese.

Migratory birds can often be spotted here, as they follow the bridge when flying south across the Great Belt. There is a good chance of seeing common buzzards at the old ferry port on their way south in the autumn.

The entire area is protected, and the central part around Østerø Lake is an internationally protected Natura 2000 area, which means that there are strict requirements for nature conservation.
There are several different walks and trails in the area. Please note that during the breeding season, there is limited access along some trails. There is full access all year round on the long route, which is approx. 4.6 km.

The lighthouse stands at the far end of Knudshoved. On a map from 1789, the place is marked with the words "light". Next to the lighthouse is the old ‘knaldstation’ - a 7 meter tall mast with tilting gallows. Cannon shots were hoisted into the tilting gallows when fog made sailing on the belt difficult in the old days. When they disembarked, the sound could be heard far beyond the Great Belt. At Slipshavn - the current military marine home guard station - there is an old fort from the 17th century.

Slipshavn emerged as a customs office and the old customs buildings still exist. During the First World War, a landing pad was built for seaplanes and the place could be accessed by railway too. The hangar and remnants of runway embankments are still visible. Unfortunately, the military areas of Slipshavn cannot be accessed by the public.

An actual station was also built at Knudshoved later in order to ensure that transport across the Great Belt could be carried out even in severe icy winters, as the Great Belt ferries did not have to sail all the way to the harbour in Nyborg. The railway quickly proved redundant and was closed down again. Later, trains transported visitors from Odense to Nyborg's excellent beaches. Bathers thus traveled by train to the area that today forms Fyns Badestrand - Funen's widest sandy beach. However, to this day, Knudshoved is still best known for the Great Belt crossing. Until 1998 the ferries sailed vehicles and passengers to Halsskov.