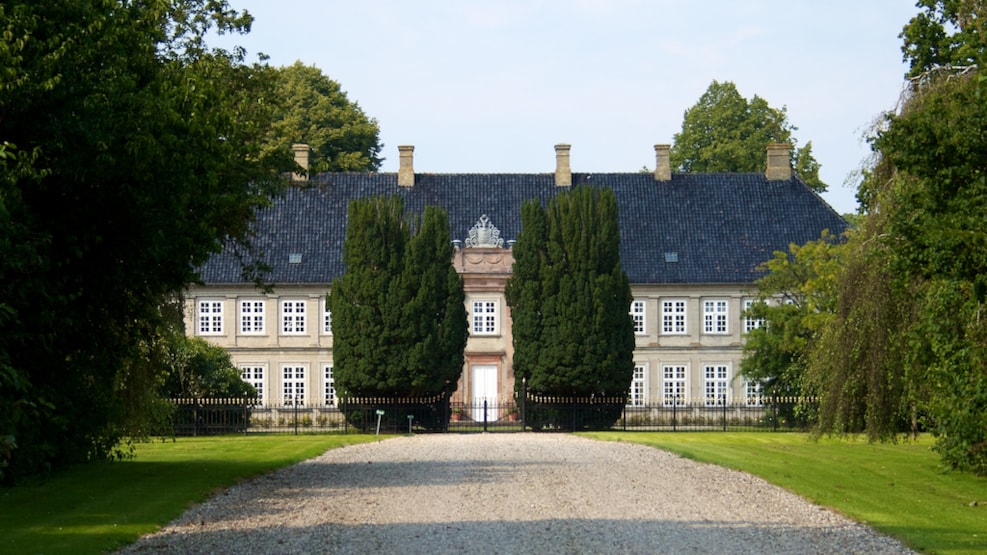 The beautiful, classicist estate - Juelsberg Gods - west of Nyborg, is located with a park, Linde alleys and the nearby forest as an obvious excursion destination in the summer.

Juelsberg Gods originates in its current form from the 1770s. It was designed by the architect Johan Jacob Encke, who was the master builder in Nyborg and was behind a number of the historic houses and neoclassical facades that today make up the historic city center of Nyborg after two violent city fires in the 1790s had destroyed the medieval city core .

The estate is still owned by the Juel family, but there is no access to the estate today. There is, however, access to the park during the summer. To the north of the park is a tea pavilion from 1843.

The park at Juelsberg is open daily between 10:00 and 17:00 in the period 1 May to 31 October. Access to the park is through the small iron gate on Juelsbergvej – north of the estate itself near the tea pavilion, where signage indicates more detailed access conditions. The park is closed to bus companies. Dogs are not allowed in the park.

Gregers Christian Juel, however, died young (38 years old) in 1776. His widow Amalie Christiane Raben was a skilled and efficient lady who managed the estate deftly, and began the construction of the distinguished and stately main building for Juelsberg, which was largely completed in 1786 Juelsberg's main building was built in the style of the time.

In the 1860s, the two side wings were added at a time when Juelsberg Gods was Funen's largest estate in terms of hectares. Until 1669, it was crown property that belonged to the great royal Nyborg County, after which it was sold to Claus Rasch, who called his new property Raschenberg. At that time, there was an older manor house, Baunegård, on what was to become the battlefield for the Battle of Nyborg in 1659. In 1772, the estate is bought by privy councilor Gregers Christian Juel, who has Juelsberg built.

The talented architects G. D. Tchierscke and G. E. Rosenberg have given the buildings their unusually beautiful and festive space. Few Danish manor houses contain such stylish interiors from the last half of the 18th century.