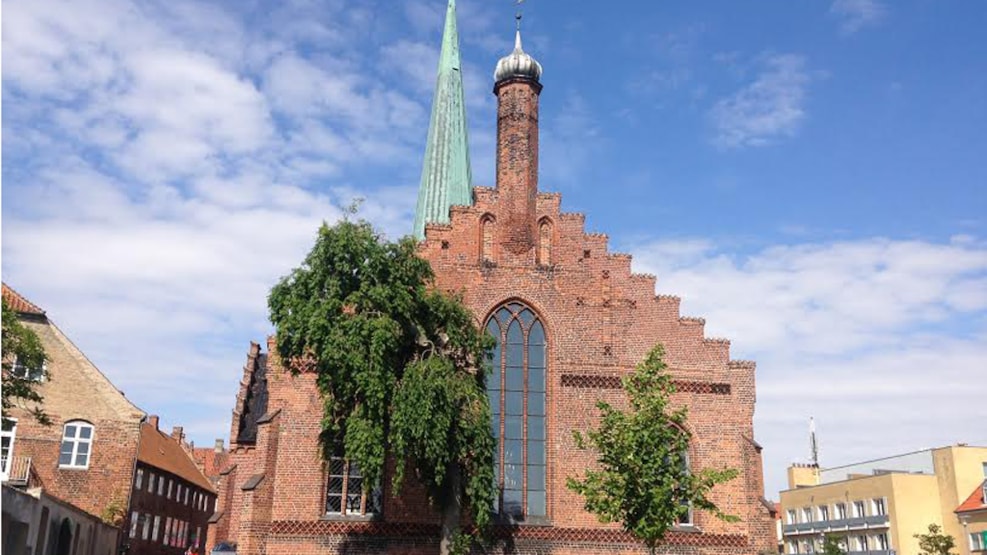 Nyborg’s Church of Our Lady was built by Margrete I (1376–1412) in 1389. According to a priest’s account from the 1630s, it was built to mark the military victory over the Swedish king, Albrecht of Mecklenburg, which made it possible to unite the three Nordic kingdoms in the Kalmar Union. Some ten years earlier in 1377, she had united Denmark and Norway under her authority for her son Oluf at the Danehof at Nyborg Castle.

The two crucial events that led to the formation of the largest kingdom in Europe, geographically speaking, are thus connected to the history of the town, the church and the castle. It is possible that the church had a predecessor, which Margrete extended, but whatever the case, it is the only monument we have in Denmark directly related to the establishment of the Kalmar Union. The building was completed in 1428, when Bishop Nafne inaugurated “the nave of the holy house”.

The church is a gothic building with three naves closed off to the east. The interior shows clear deviation between the two sections mentioned above – particularly with regard to the arcade pillars with their different details. The present church, however, is the result of a resto
ration at the end of the 19th century. Prior to this alteration the church had virtually five naves, since there were both on the north and south sides a number of chapels, which in the course of time had been joined and thus resembled naves. In the east gable the church has a socalled mass bell steeple. This architectural detail is as old as the church itself and is found in other churches on Funen. However, the onion dome beneath the spire probably dates from 1779.

The west tower was added to the church in 1581 and until 1834 was exposed to the town’s traffic from north and south. The lower part of the tower is built of granite ashlar which, according to written sources, was a gift from the king. They are described as “grey, hewn stones”, and they may possibly have come from the demolished church in the old town or from Hjulby Church, which was likewise pulled down after the Reformation. The baptismal font is neogothic and made of marble (1876). There is also a Romanesque font in the south chapel. The pulpit is from 1653 and is by Master Andreas the sculptor and Christian IV’s blacksmith Caspar Finche made an extremely elegant wrought iron gate. There are a number of interesting epitaphs and memorial tablets in the church.