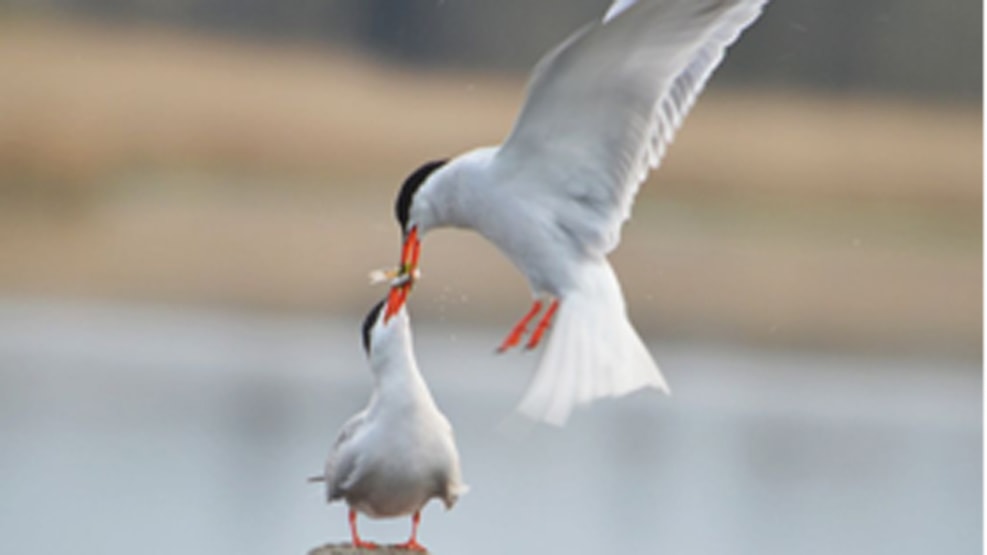 3. stop: The Green Clover Path - The Ramparts of Nyborg

The area surrounding the ramparts of Nyborg, ’Ladegård’ lake and river are grounds for a rich habitat of many different animal species. Among those are terns, common murres and the purseweb spider.

The tern is a gull with a thin orange-red beak with a black tip, very short legs, long slender wings and a characteristic split tail.

You can often see the murres flying in flocks over the city's roofs during the summer months. It can be confused with swallows, but has the characteristic sickle-shaped stiff wings and typically flies higher than swallows.

The murre is sometimes referred to as a "screaming bird" because it lets out a loud scream in flight. The life The murre is so adapted to a life in the air that it also sleeps in the air. Only during the breeding season does it stay in the nest, which it typically under a roof. Under the castle's roof, several murres breed, and some have been coming here for many years.

The common kingfisher is a colorful and exotic looking bird. Its upper side is turquoise blue, its wings are greenish blue, its underside is orange and it has a white tail stripe. The common kingfisher tends to be very shy and is therefore rarely seen. Its nest is typically placed in a tunnel, which it excavates in slopes and is around 1 meter in length. It can be seen diving for small fish in Ladegård lake.

A very exciting find was made on September 2012, when a local boy found a specimen of a purseweb spider on the embankments. It turned out that there is a large population of the dangerous-sounding but largely harmless spider on Nyborg's ramparts.

The discovery was special, as the spider has only been found in a few locations in Denmark, and because it had previously been thought that it was only found in natural locations. To find it, you either have to be lucky to find a male that has crawled out of its web in autumn to look for a female to mate with. Otherwise, you have to look for a small "sock" the size of a little finger. The "sock" is the part of the web that sticks out from an approx. 30 cm long tunnel that the spider has dug out in the slope/rampart. The "sock" is camouflaged with soil and plant debris and functions as a trap. When a prey moves across the web, the spider grabs the prey, pulls it down through the web and then seals the web, preparing it for the next prey. The spider’s jaws are forward, where all other spiders bite from the side. The female is approx. 2 cm long with short legs and approx. ½ cm long jaws.

The male is approx. 1 cm long and has slightly longer legs than the female. Northern bird spider is very rare in Denmark.

Plant life at the ramparts

On ‘Lindealleen’ you can see the linden trees. Linden is a large tree of up to 30 meters in height and with a beautiful crown. Its bark is smooth and reddish brown, but can become darker and furrowed on old specimens. The flowers are whitish-yellow, and pollination takes place with the help of insects. Linden immigrated to Denmark for approx. 10,000 years ago. Due to its usefulness for many different purposes, man has come close to exterminating the linden, so that it is now only found here and there. The linden tree is also called the tree of love.

On the sloping embankments, many cowslips bloom from late spring. They are beautiful in their yellow/orange colors. There are several different species of cowslip in Denmark, but you often come across the flat-collared, hollow-collar and large-flowered cowslips.