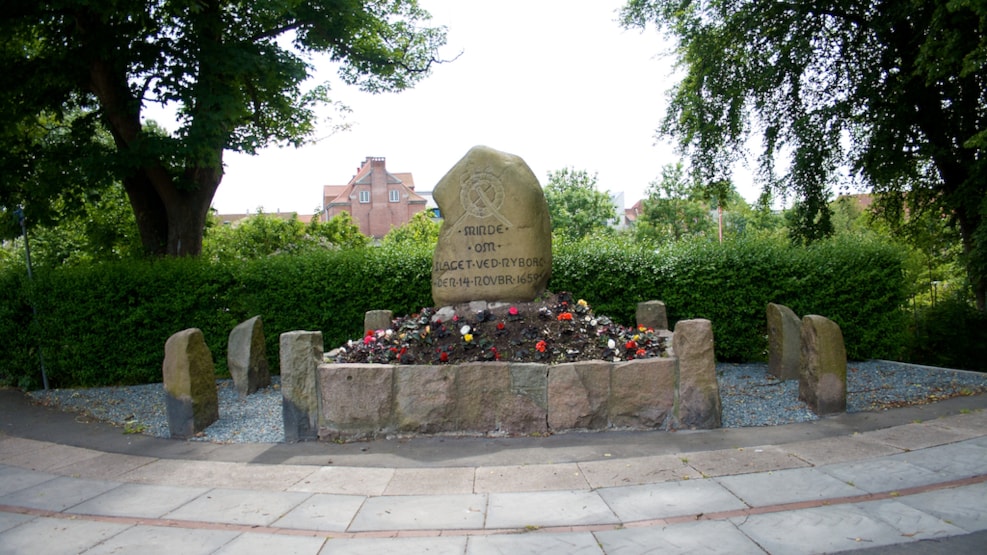 Walk at Slagmarken (the battlefield)

Historic walk. When you step outside the impressive ramparts behind Nyborg Castle and follow the little path along the picturesque river Ladegårds Å, you are walking into a piece of Danish history. This was where one of the greatest and most important battles in the history of Denmark took place between Denmark and Sweden in 1659. When you look out over the fields where the dramatic events took place, beneath the singing of the birds you can still sense the rumble of the horses hooves; see the columns march forwards as a slight haze over the hills; hear the screams and the distant roar of the cannons and muskets. 20,000 men clashed here – over 3,000 of whom lost their lives. The Danish army and its allies triumphed.

The walk to Slagmarken on the outskirts of Nyborg sets off from Nyborg Castle. Denmark and Sweden had waged war against each other for centuries. Denmark had long been the dominant power, but by the mid 17th century, the tables had turned. In an attempt to reverse the situation, King Frederik III of Denmark declared war on Sweden in 1657. This very nearly resulted in Denmark becoming part of the Swedish empire, but it survived as an independent state partly because it managed to defeat the Swedes in these fields on 14 November 1659. Casualties were high, but it was a great victory for the Danes. Despite the victory, Skåne, Halland and Blekinge, which had been lost in 1658, were made over to Sweden at the peace negotiations in 1660 as required by the superpowers of the day. The path was renovated as part of the celebration of the 350th anniversary of the Battle of Nyborg and now forms part of the story about the dramatic and historic events which took place outside the city gates.

Continue along the path to the viewpoint at Svenskehøjen (Swedish hill).   Local legend has it that Svenskehøjen, which stands proud in the middle of the battlefield, contains the bodies of over 2,000 Swedish soldiers killed in the line of duty. The mound, however, dates back to the Bronze Age. Decisive and hard battles took place right here, where the Danish troops broke through the Swedish positions. In 2009, an archaeological survey of the battlefield was initiated by the East Funen museums. The course of the battle had very much left its mark on the landscape and the events could be followed very closely, providing new insight into the Swedish line up.   According to the most famous copperplate depicting the battle, the front extended all the way from Hjulby Sø lake to Skaboeshuse on the coast. However, a hitherto unnoticed drawing from 1663 by Swedish engineer Carl Heinrich von der Osten, who fought in the battle, clearly shows that the front only stretched halfway out to the coast towards the forest, which can be seen on the other side of the fields. It happened right here!   Continue to the next point at Hjulby Sø lake. The area was more swampy back then. Stretches of marshland and waterholes formed part of the Swedes’ natural defences. There was also a man-made trench which stretched from Hjulby Sø lake to a former lake near Borgeskoven wood. The Danish army came over near the lake and broke through the Swedish lines following harsh battles by Svenskehøjen. The Swedes then retreated towards the town, where they surrendered after fierce bombardment the next day.

Slagmarken Svenskehøjen Nyborg Castle: It is a 3 km walk from Nyborg Castle to the last information post. The length of the entire marked route is 4.5 km and the path is marked out in yellow. The section of the path marked in light yellow is most passable in the summer months. The walk to Slagmarken on the outskirts of Nyborg sets off from Nyborg Castle. The path follows Ladegårds Å river from Nyborg and on past Hjulby Sø lake. The river runs through a meltwater valley from the last Ice Age, which ended around 10,000 years ago. The surrounding landscape consists of low moraine hills. The western section of Ladegårds Å river is a man-made watercourse, created in c.1200 to provide the mills in Nyborg with water. Over the centuries, there was much dispute between the farmers in Kullerup and the millers in Nyborg about who had the right to the water.   On part of the stretch, the path runs along the embankment built for the railway between Nyborg and Ringe. The railway was in use from 1897–1962. The construction of the railway involved major earthworks on the stretch along Ladegårds Å river. To the west of Ladegårdsvej, the path runs across the land of the Juelsberg Gods estate. The landscape alternates between woodland, arable land, marshland and meadows. Along Hjulby Sø lake, you can observe the marsh harrier in elegant flight.   In early spring, flocks of resting geese can be seen there, some of which stay at the lake to breed. In the spring, the enchanting song of the nightingale can be heard and the lapwing can be seen in the sprouting fields and meadows.   Nyborg Castle is Denmark’s oldest preserved royal castle from the Middle Ages. Founded in the 1170s, it became a venue for the Danish Parliament – Danehoffet – and then a royal residence in the capital city of Denmark in the Middle Ages. You can still walk through the very rooms where Denmark’s first constitution was signed, where Denmark’s last royal murderers were convicted, where the most powerful men in the land met in Parliament, and where both kings and their heirs to the throne held court.   Nyborg Fortress was built in the first half of the 17th century. The castle lost its military significance and fell into decay. In 1722, the palace building and the remains of the east tower were converted into an arsenal and gunpowder magazine for the garrison manning Nyborg Fortress. It stretched all the way around the city and was one of a number of fortresses across Denmark which played an instrumental role in the defence of the kingdom until 1913.