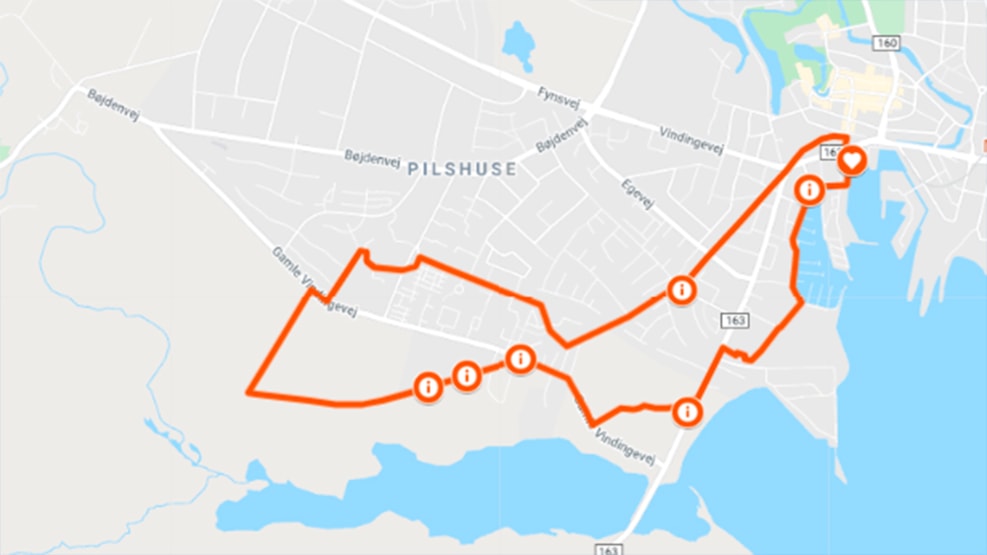 The route takes you around Nyborg Marina. From the “newer” part, which is in fact the oldest part, and through the old marina with its playground and water sports clubs. The path then moves inland past the recently restored Dyrehave Mølle mill, and through the ice age landscape in Dyrehaveskoven woods, which was originally a royal deer park established by Christian III and probably the oldest deer park in Denmark. It once extended all the way from Nyborg Castle out to the fjord, but only the southernmost part of the woods remains today. From here, the route takes you further along Holckenhavn Fjord, where you will see abundant bird life, possibly including sea eagles and ospreys.

Continuing after the deer park, you’ll come across the old railway track leading to Svendborg, on which train passengers once enjoyed the most beautiful view over the fields and Holckenhavn Fjord. Trains no longer run along the stretch, but you can walk along the path where the railway track once lay. The route takes you almost to Vindinge and Gammelborg. If you’re cycling, we recommend that you follow the track all the way to Vindinge. If you’re on foot, you can follow the signposts via the footpath across the fields.

The Red Path moves away from the railway track and through one of Nyborg’s new residential areas and on to another track, Avernakkebanen, which heads together with the Red Clover Path towards the town. Over the past 100 years, this railway track has been used exclusively for industrial transportation, and it is still used 1–2 times a week.

NB: The stretch through Dyrehaveskoven woods and via the footpath across the fields at Vindinge is suitable for MTB or rambling. If you wish to cycle, you can pull your bike or stay on Dyrehavevej/Gl. Vindingevej and follow the disused railway all the way to Vindinge.