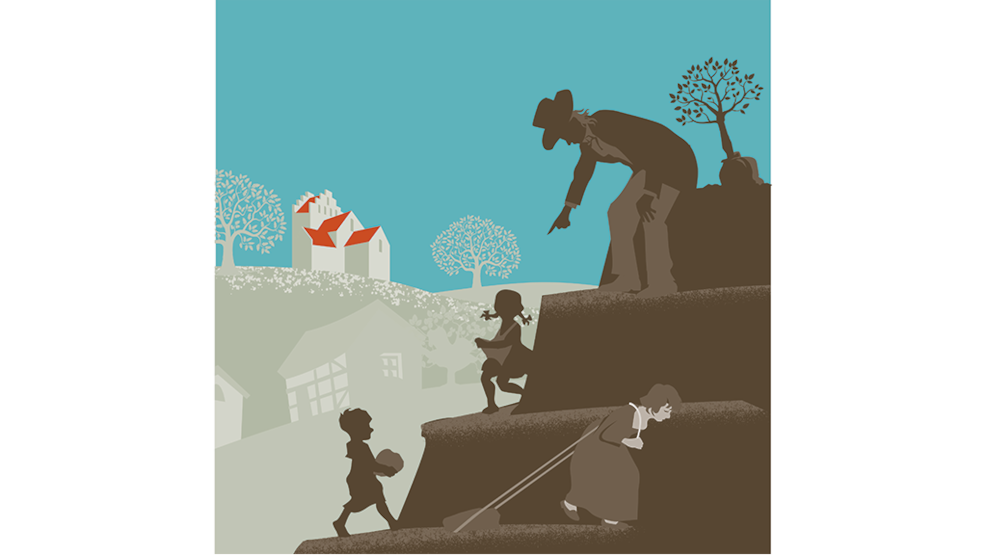 Listening to the tales, you will hear about a wealth of secrets, dramatic events, love stories and lots more.

In Nyborg and the surrounding area, stories are hiding everywhere – in the countryside and in the city itself, in the crevices between stones, amongst tufts of grass, on the earthen ramparts and right by the water’s edge.

‘Degnens høj’ is one of the most forgotten attractions on Funen. On this very hill, the teacher and parish clerk Mads Hansen taught his pupils how the slaves built the pyramids in Egypt. The girls carry earth and gravel in their aprons, and the boys carry stones in their arms. Here, by the beautiful, old elm tree, you are taken back to a time when pupils first had to be enlivened, then enlightened.

You take a step into the history of Magelund, and to 1391 when Queen Margrethe I of Denmark took over Magelund Castle, only to burn it down! You get to follow in the footsteps of the Queen on the ramparts, where Hans Christian Andersen is also known to have wandered.  You hear of the time he spent at the nearby Lykkesholm Castle and the happy impression it made on his life.

Stranded in the dark – the lighthouse at Knudshoved – Slipshavnsvej 30A, 5800 Nyborg

The old lighthouse has been standing here since 1940, but you get to travel even further back in time. The spot offers excellent views of the Great Belt Bridge, but hidden tales also highlight the role of Knudshoved as an important traffic hub over the years. Right back in the days when travellers had to break through the ice covering the Great Belt during extreme winters. There is ice everywhere, and crossing the Great Belt in the icy darkness is a fearful undertaking.

Standing on the breathtaking and picturesque ramparts, it is hard to imagine that a massacre once took place not far from here – just outside the city. Where you are now standing, young Swedish soldiers were desperately trying to hold on to Nyborg after conquering the city. From here they had to venture into battle against a far superior Danish army and its many allies, who wanted to retake Nyborg. A bloody battle ensued that will never be forgotten.

In the years before the First World War, seaside hotels started springing up along the Danish coastline – primarily to cater for the bourgeoisie – and so also in Nyborg. Here at Nyborg Strand, where you can now enjoy the beautiful view of the Great Belt Bridge, we travel back to before the bridge was built. Here, holidaymakers were enjoying the sun, the sea and the sand – right up until the German occupation of Denmark cast the shadow of war across the joys of the seaside. Now, you can hear how an eerie symbol of the occupation was turned into something beautiful.