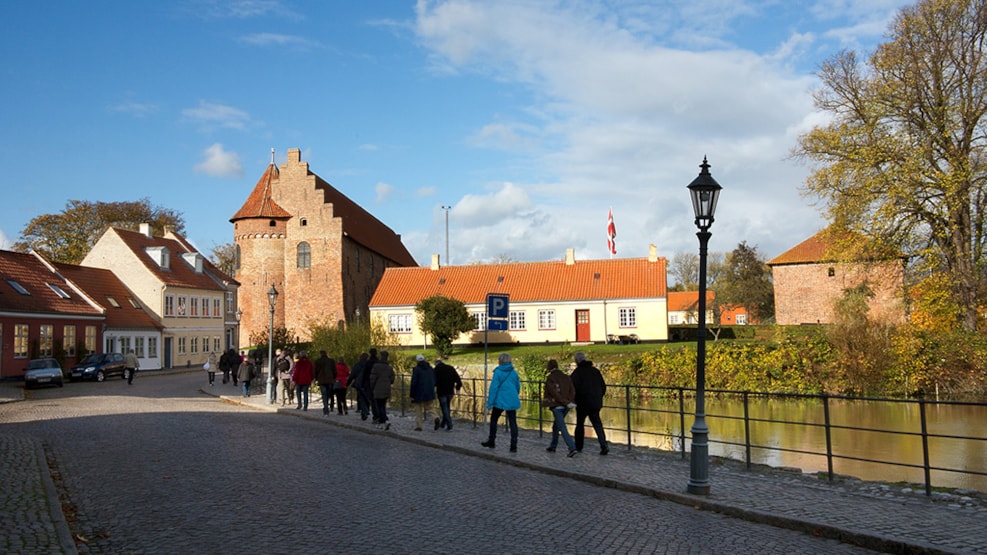 Walk through Slotsgade and enjoy the view of the unique urban space and surroundings – part of the so-called “Mirror of Princes”, which is reflected in the still waters of Møllegraven, while Nyborg Castle stands proud right ahead of you...

As a royal city, Nyborg was built and extended for centuries throughout the Middle Ages. In the early 16th century, the town was even named Denmark’s first capital. Today, you can walk in the footsteps of Danish kings and queens through Nyborg. And one of the streets you mustn’t miss is Slotsgade.

Danmarksporten and the road through the royal city

Walk through the Landporten gate – the only access to the royal city of Nyborg from land – where you will begin to get a feel for the mighty fortress when the darkness in Denmark’s longest barrel vault compels you to focus on the light at the other end of the gate – from inside Nyborg itself. When you enter the royal city, you will see the royal Nyborg Castle standing majestically atop Slotsholmen, the castle islet, surrounded by ramparts and a moat. Over the next few years, the Castle Project will recreate the contours of mighty Nyborg as part of the efforts to make Nyborg a worthy candidate for UNESCO’s World Heritage List.

On your way along the main street past Nyborg Castle across Torvet (the square) – the king’s and the city’s original tournament ground – you are walking through a rich cultural heritage without parallel: Slotsmøllen (the castle mill), the town hall and old merchants’ houses. Nyborg Library stands out, but is nevertheless worth a visit, with its background in Danish design, where Hans J. Wegner designed the fittings and furnishings, while Erik Møller and Flemming Lassen designed the building.

You are now in the heart of one of Denmark’s most impressive, cosiest and most important culture-historical urban spaces – at the entrance to Slotsgade. Along Slotsgade runs “Møllegraven”, which has supplied the Castle Mill with water since the Middle Ages and at the same time formed part of the impressive fortifications around Nyborg Castle and the city. The cobblestones lead you past Gyldencrone’s mansion and the iconic mayoral residence. Together with a host of other town houses, you can imagine the so-called Mirror of Princes – the planned royal city – where magnificent buildings have formed the backdrop to the royal castle on the other side of Møllegraven.

On your way along Slotsgade, you can look down the straight streets running parallel to one another and connecting the centre of the medieval city with the royal castle at one end and Nyborg’s Church of Our Lady at the other. The street layout is the same as it was in the Middle Ages, and there are historical buildings and pleasant shopping streets in all of them.

So, how far have you walked to experience Nyborg’s cosiest street? All in all, just 500 metres from when you entered the royal city via Landporten until you crossed Torvet and walked along Møllegraven to where you are now, standing in front of Nyborg Castle.

City and fortress walk on your own or with a guide

We have presented Slotsgade to you here, but there is so much more to Nyborg than this one street alone. Do yourself a favour and explore the whole of Nyborg – either on your own or with a guide. Nyborg Castle offers guided tours of the city several times a week from April to October. They take around 1 hour.

If you wish to experience Nyborg on your own, we recommend that you acquire a “City and Fortress Guide”. This small leaflet can be purchased at the tourist office on Torvet in Nyborg. The guide shows you and describes Nyborg’s historical buildings and squares, allowing you to feel the presence of history on your own all year round.

The market town of Nyborg with its shops, restaurants and cafés

Nyborg is not only an old royal city but a market town, too. Borgmestergården on Slotsgade is one of the oldest preserved merchant’s houses, and it was built by mayor and merchant Mads Lerche in around 1600. Today, the building helps to frame and communicate the history of Nyborg’s unique urban space as part of East Funen Museums. You will find a nice little shop here selling souvenirs, books about Nyborg, etc. As you make your way around the historic city centre, you will find a rich and varied array of shops, restaurants and cafés. Several of them have cosy courtyards, while others make use of the narrow pedestrian streets to serve and display their wares.

Visit Nyborg and experience the Danehof, the Harvest Market or Christmas in the Old Royal City

Over the course of the year, a number of events are held on Torvet. These events often have an historical background, such as the Danehof, the Harvest Market and Christmas in the Old Royal City. Common to them all is that they are held on the purpose-built square that has been at the heart of Nyborg for centuries – Torvet. From here, the various events spread out through streets, including Slotsgade.

Nyborg Castle and city are currently striving to become a worthy candidate for the UNESCO World Heritage List. The work includes comprehensive restoration of the existing Nyborg Castle, as well as an extension containing a modern visitor centre and dissemination facilities. The revitalised castle will reopen with an elevated watchtower, new access bridge and ring wall from Slotsgade. It is not currenty known when the castle will reopen.