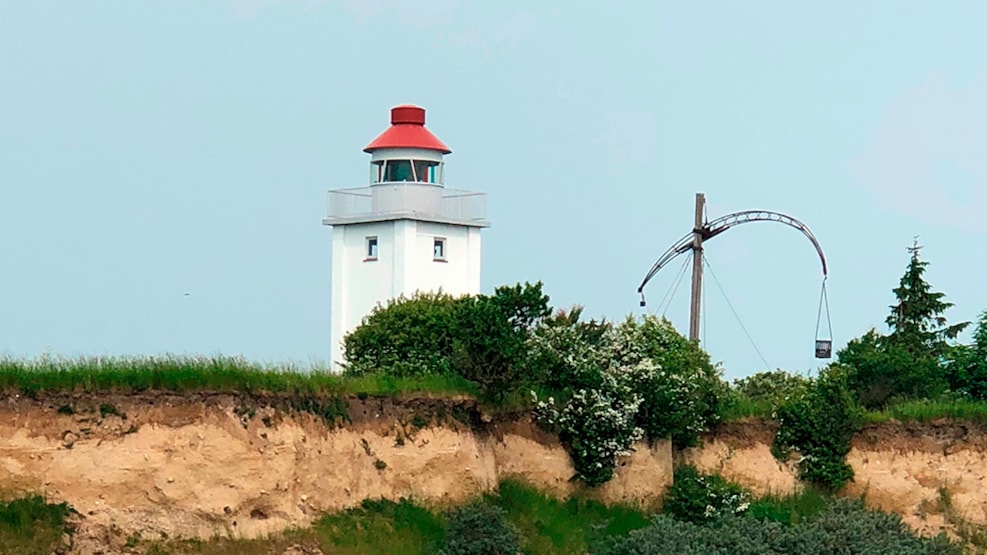 The Knudshoved Lighthouse along with Denmark's only “knaldfyr” is situated on the eastern part of the Knudshoved peninsula.

The Knaldstation at Knudshoved is probably one of the country's oldest preserved acoustic warning systems.

It was established as a warning system for ferry traffic on the Great Belt by the Lighthouse Directorate in 1901 to replace the out-of-date acoustic warning that occurred by firing two cannons called "Löwes Batteri". The Knaldstation had to guide the ferries safely into Nyborg Fjord by sound in case of dense fog, heavy snow, etc. Under normal weather conditions, the ferries could navigate by the visual beacons that had been installed since the middle of the 18th century by bonfires and lighthouses to guide the ships safely into the harbor in Nyborg. But when the weather and visibility were bad, you couldn't see the lighthouses.

The Knaldstation was built with a 7-8 meter high mast, which at the top was equipped with a curved rocker arm, which could be pulled down to a small shed, which was built next to the mast. Here the explosive charges were mounted on a gallows, and the rocker arm was again raised into the air. Via an electrical device, the explosive charges were ignited and the ferries could orient themselves by the sound.

A solid brick house was used to store the explosive charges, which still stands in the area. It was built for the storage of gunpowder and bullets, from the time when cannons were still in use. However, Løwe's cannons were not up-to-date primarily due to the fact that the dull sound that the cannons emitted had difficulty drowning out the noise that the steam-powered ferries themselves created. The battery remained intact and stood in reserve in case the blasting station should fail.

The alarm station was closed down in 1934 and was replaced by a more modern warning system (electric sirens). From 1934 and 40 years on, the Knaldstation fell into more and more disrepair, and in 1976 the building collapsed and fell onto the beach due to cliff erosion. In 1983, the Knaldstation's mast and rocker arm were reconstructed, but incorrectly fitted with a firewood basket, which was a "rocker beacon" for visual warning.

After the restoration in 1983, the Knaldstation's mast and tilting arm were once again dilapidated and in 2009 it was renovated with some fresh coats of paint and new steel wires. In 2022, DSB Properties carried out a gentle restoration of the mast, tilting structure and the braced wires. Today, the mast and rocker arm have been returned to their original construction with a gallows for attaching the explosive charge.