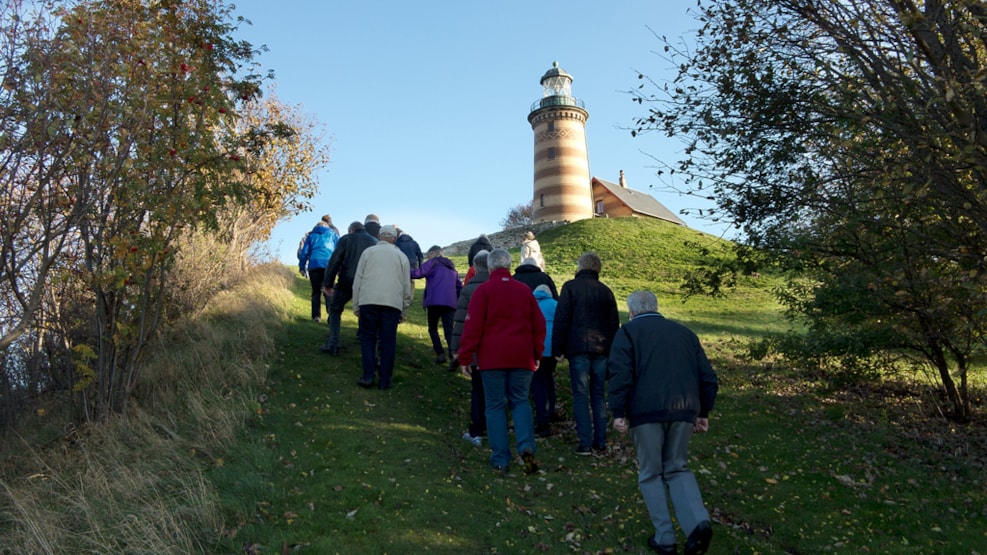 Guided trip to Sprogø and Nyborg

Sprogø – a unique experience with a guide

The tours sell out fast, but you can see tour dates and buy tickets here.

If you can't find any available tours, you are welcome to fill out this form and sign up for the waiting list. You will be contacted when new tour dates become available.

The trip lasts around 5 hours and is by bus and on foot. There’s a guide with you on all of the tour, so:

Welcome to a fantastic day on Sprogø and in Nyborg, the Heart of the Kingdom of Denmark.

Sprogø is a unique, protected island at the centre of more than a thousand years of Denmark’s history. The island has unique flora and fauna, historic monuments and modern technical installations.

VisitNyborg prioritises providing an experience that’s out of the ordinary. You can learn all about what makes Sprogø unique and connects Nyborg and Sprogø together in their central place in Danish history.

Over the years, Sprogø has played a central role in Denmark’s history. From when Valdermar’s Castle was established on Sprogø as part of Denmark’s defences against the Wends, until the modern transport corridor of the Great Belt Fixed Link (bridge and tunnel system across the Great Belt).

The centre – or heart – of the Danish kingdom is vital for supplying it. It’s here that everything passes through and the life of the kingdom is maintained. The heart is also strategically the most important part to protect. This can be seen with the Great Belt Fixed Link, as well as at Nyborg and on Sprogø with Nyborg Castle and Valdemar’s Castle.

But it was not only the king at Nyborg Castle who had his eyes on Sprogø. Due to its isolated location in the Great Belt, Sprogø has become the home of a unique animal and plant life, which is not found elsewhere. In the past, the Danish state also used Sprogø to separate girls and women “of easy virtue” from the “respectable” part of the population.

Apart from Sprogø, we also take a tour around the town of Nyborg, the Heart of the Kingdom of Denmark

Nyborg had a strategically important location at the centre of the kingdom. This persuaded the kings to make Nyborg a town of royal residence. Here the Danehof, the medieval parliament, was based. When the most powerful men in the kingdom were gathered, jousting took place and markets were held in the town. All this occurred whilst momentous decisions were being made behind the walls of Nyborg Castle. For example, Denmark’s first constitution, Eric V’s charter, was signed at Nyborg Castle in 1282. Denmark’s last royal murderer was also sentenced here.

Nyborg, the Heart of the Kingdom of Denmark, is therefore much more than Sprogø and a motorway bridge. Nyborg has played a central part in Denmark’s history. We would like to give you the opportunity to experience Nyborg. You can hear the story that makes Nyborg and Nyborg Castle such a unique whole, which is being put forward as a worthy candidate for addition to UNESCO’s World Heritage List.

Funen is also known as Denmark’s garden. Something that the king used to make East Funen, in particular, ”the King’s Pantry”, so that his court could be well supplied. Today, Funen is still known for its wealth of food products and local taste experiences. The town’s restaurants can welcome you before or after the Sprogø trip. Several of them offer wonderful views of Sprogø, the Great Belt and the Great Belt Fixed Link, which are the day’s destination, and many of Nyborg’s shops sell foodstuffs from the King’s Pantry.

Welcome to Sprogø and Nyborg – the Heart of the Kingdom of Denmark!