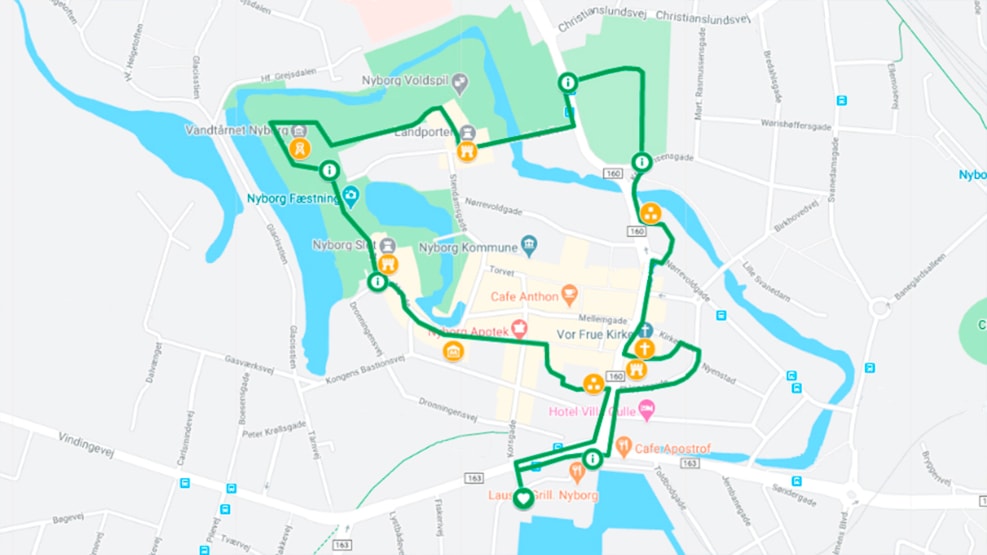 Come on a pleasant walk around Nyborg’s historic town centre and discover, among other things, the impressive fortress at Nyborg Castle with its ramparts and cannons. The tour takes you around Nyborg, the Heart of the Kingdom of Denmark.

Experience the royal town of Nyborg on the Green Clover Path

Starting from the harbour, the path takes you through what used to be the Beach Gate (Strandporten), built by Christian III, via Rosenbækken (Rose Brook), where you can see the course of the longest preserved medieval city wall in Denmark. From here, the path heads in through the courtyard of one of the town’s many old merchant’s houses, and out into one of Nyborg’s charming shopping streets. On Slotsgade, which borders the castle lake, you’ll find Borgmestergården and the architectural gem that is Nyborg Library. You then continue along the ramparts around Nyborg Castle and the preserved parts of the impressive fortress.

At the fortress, originally built by Christian III as part of Denmark’s first capital city, you enjoy a fine view of the town. You also have the opportunity to experience the special nature of the ramparts, where species including the Purseweb Spider have been found. The ramparts still have their cannons, narrow passageways and land gates.

The fortress is also where you’ll find the old water tower near the Queen’s Bastion, which is now a listed building and open on special occasions. From here, you head towards Møllebakken and out through Landporten (the Land Gate), which together with Strandporten (the Beach Gate), formed the entrances to Christian III’s fortified city. From Landporten, you follow the cobbled road lined with linden trees out to Ravelinsvej, which is bordered by Nyborg Cemetery. The cemetery has a special history, as parts of it are located on the former fortress grounds.

The cemetery and the Church of Our Lady

From the cemetery, the Green Path takes you over the last preserved bastion of the former fortress, Prins Carls bastion, and on past the Church of Our Lady, built by Margrethe I in 1388. Behind the church, you have a glimpse down through Nyenstad, which is also originally from Christian III’s day. The buildings here were probably built to house naval staff. From Skippergade, with its cobblestones and half-timbered houses, you get an idea of the layout of the medieval town of Nyborg, in extension of Rosenbækken.

NB: There are some steps on the stretch via Rosenbækken and in the cemetery. The route can be cycled, with the exception of these short stretches, where you’ll have to get off and pull your bike.