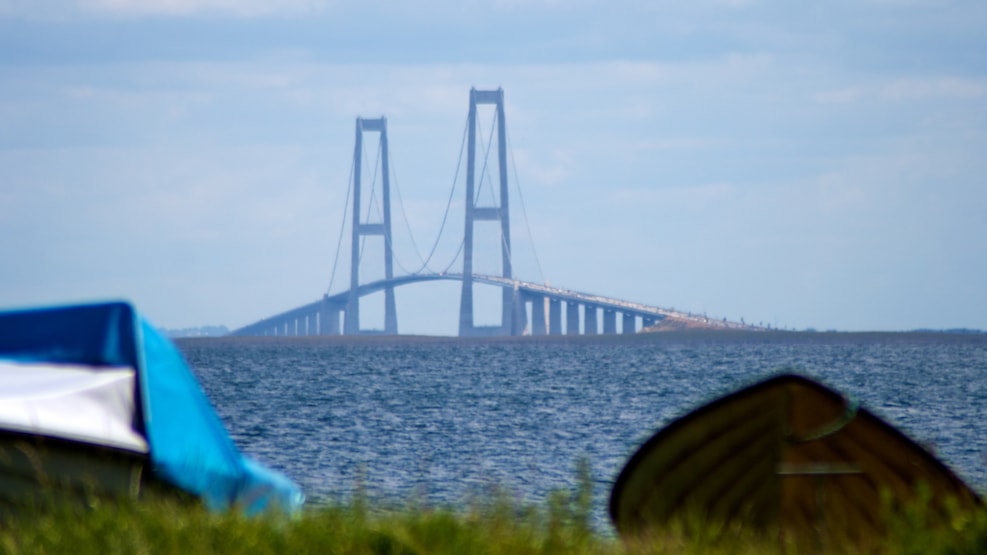 The Great Belt Bridge is 18km long and constitutes the fixed connection over the Great Belt between Nyborg and Korsør.

It is one of the world’s largest construction projects and consists of a railway part and a motorway part.

The East Tunnel was constructed in 1988-1996. The East Tunnel for trains is 8,024m long and consists of two separate tunnels with a track in each. The two tunnels are connected by 31 cross-tunnels, which both function as escape routes and contain important installations. The East Tunnel is a bored tunnel. Four boring machines, operating in each direction in both of the two tunnels, were specially produced for this task. The 40cm-thick tunnel wall consists of 62,500 bolted together concrete elements.

The elements were produced in a temporary factory at Halsskov. From the bottom of the sea to the upper side of the tunnel measures between 12 and 40 metres. At its deepest point, the tunnel is 75m under the surface of the sea.

The West Bridge was built in 1989-1994. The West Bridge, which is a combined road and railway bridge, is 6,611m long. The West Bridge actually consists of two parallel bridges, one for the road and one for the railway. Both the bridge’s superstructure and substructure are made of concrete produced in a factory at Lindholm on Funen. The elements of the West Bridge were transported to the bridge by the floating crane, Svanen. Upon the 62 bridge piers are 63 spans - 51 spans measuring 110m and 12 spans measuring 82m. Each span consists of one road and railway girder. The bridge has a height of 18 metres for sailing under.

If you want to experience the Great Belt Bridge in a very unusual way, then go on a guided tour to Sprogø. We go on a bus tour around Ny Sprogø and see the various constructions and bridge at close hand. The tour of Gl. Sprogø is on foot. Read more about the tours and book your ticket here.