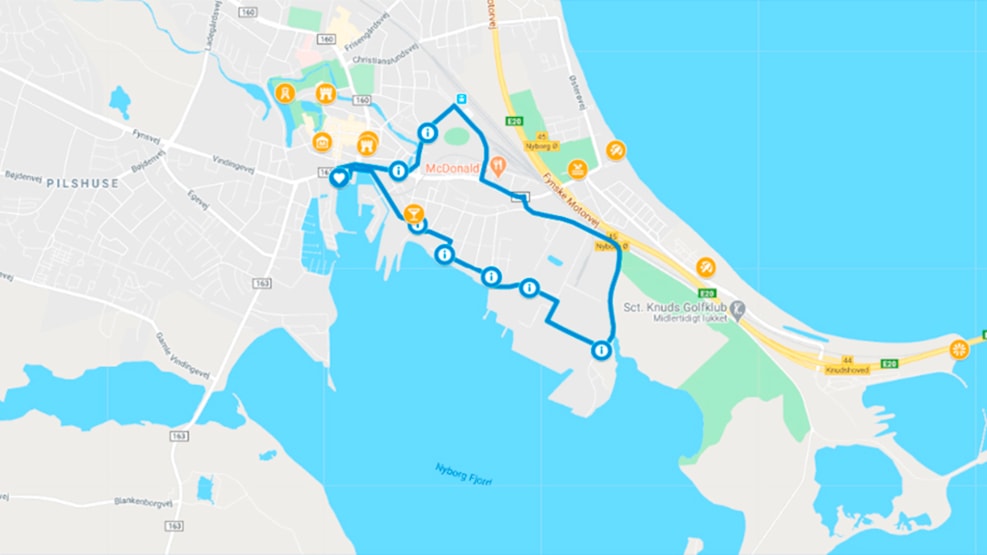 On the Blue Clover Path, you’ll discover Nyborg’s history as a traffic hub, which has defined the town for 800 years.

Discover the traffic hub of Denmark

The Blue route takes you through the history of the ferry port, railway and industrial town of Nyborg, which has historically been – and still is – a traffic hub for travellers from all over the country. This has helped define the town’s history for more than 800 years. Just over 20 years ago, it was the ferry and train traffic that left its mark on the town of Nyborg. The trains are still here, but it today it is the presence of the Great Belt Bridge that characterises the town. Nyborg is a town on the move!

The path leads you east along the harbour and the old moat to Christian Hansen’s garden, which is located by Prince Frederik’s Bastion and is a small, green oasis in the middle of the port and industrial area. You then proceed past the old station building – one of several railway stations in Nyborg – and past the new station building, which was built in connection with the construction of the Great Belt Bridge.

Along the way, you pass another green oasis, Cirkuspladsen (the circus square) which was built on the old railway land.

The path leads you from the train station through one of Nyborg’s industrial areas and on to the industrial port. Nyborg is a town undergoing rapid development, and several of the industrial companies based in the area work with circular economy, recycling and the environment. Here, the path joins the Black Clover Path and together they follow the old church and nature path along the harbour towards the town. On Kirkestien (the church path), you can experience abundant bird life, and if you take a detour out to the water, you’re in with a chance of seeing both porpoises and seals. The church path is protected, despite running through the industrial area, where companies such as Fortum (formerly Kommunekemi) form a backdrop to your walk/bike ride. So, it’s not idyllic nature you’ll experience on this route, but it shows you some of the world’s leading environmental companies and it emphasises Nyborg’s evolution from a royal town into a modern, global industrial town with sustainability at its core.

The last part of the route takes you past the area where the Music School and Sundhedshuset (the health centre), which previously served as a home for epileptics and a children’s hospital, are located, and on through one of Nyborg’s old residential areas dating back to the onset of industrialisation. The route ends here at the old ferry berths, from which DSB sailed train passengers across the country for decades. The rest of the route heads past the harbour and over Kongens Skibsbro bridge, which was Nyborg’s central pier from the Middle Ages to the late 1950s, before you find yourself back at the starting point.