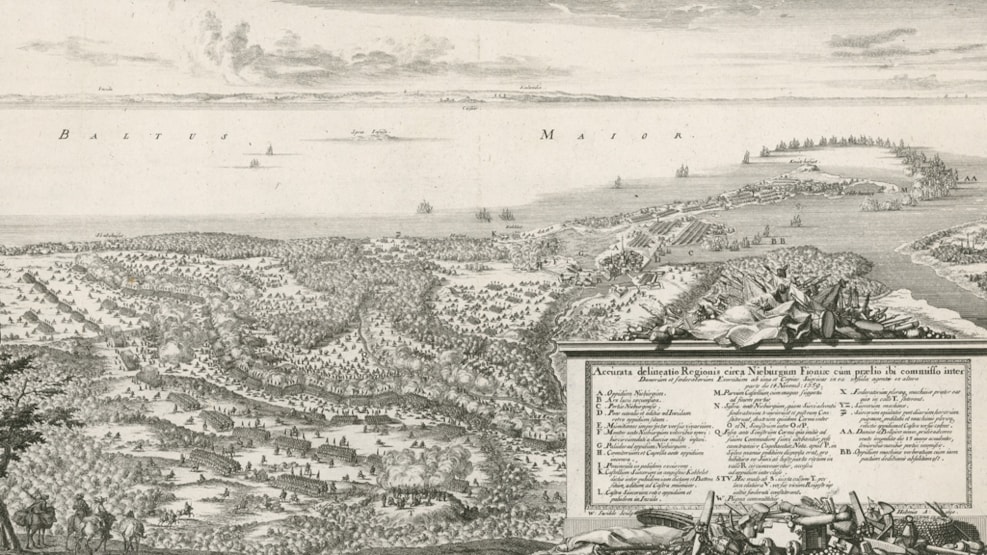 Behind Nyborg Castle, Ladegårds river flows into what was once a large castle lake, which the 17th-century fortress now cuts through. The path along the stream from inside the castle follows the old medieval path systems out to what was probably the castle barn.

The trail is a meltwater tunnel from the Ice Age that runs from the basin at Hjulby lake. It has been deepened in connection with the fact that the water from Vindinge river at the water lock Kullerup was led through a dug channel into Hjulby lake and then on to Ladegård river, where it was raised by the castle, in order to get water into the moat and to the castle lake.

At the modern pumping station springs a spring that may have been a holy spring, as stepping stones from the opposite bank can still be seen in the stream, dating all the way back to antiquity and the Middle Ages.

The old railway to Fåborg also runs along the path, where you cross a very beautiful ashlar bridge from the second half of the 19th century. The path runs right past the fields where the Battle of Nyborg took place on 14 November 1659. And if you continue along the path you come all the way to Hjulby, just over the bank where the Kongsgården was located in the Viking Age and the early Middle Ages. Here sat the king, Knud the 6th (1181-1202), together with his cousin Knud Prislavsen, who, according to the written sources, should have built the oldest Nyborg in 1183 and signed an agreement. It is probably here that the big royal construction project in Nyborg was decided upon, which was completed as a ring-walled castle in red brick no later than 1210.

Ladegård lake and Hjulby lake are part of an impressive water regulation system, which was established in the Middle Ages to ensure water for Nyborg for defense and supply reasons. The raising of Vindinge river at Kullerup, west of Nyborg, is the starting point for this enormous project. From here, a system of dug canals, dams and water lock ystems lead the water to Nyborg via Hjulby lake and Ladegård river, whereby the fortress moats and mill installations have been supplied with water, just as the city's citizens have thus obtained their drinking water. The streets in Nyborg were under Christian III. supplied with drinking water, as oak pipes were laid around the city. It was a long-lasting solution, and the system with the wooden pipes was only replaced by the construction of a new waterworks in 1876.

The dam and lock at Kullerup were destroyed during the Swedish wars. The new dam did not have a lock, but during harvest time the farmers were allowed to break through the dam on the condition that they closed the hole again when the harvest was over. However, this did not always happen. The dam was not popular with the area's farmers, as it caused the fields to be flooded. In 1674, the farmers were ordered to repair the hole in the dam, when the town lacked water in the gutters. The dam got a new lock in 1726, after there had been problems with the water supply to Nyborg the year before. The new lock did not resolve the dispute, however, and the controversies were only really settled in 1950, when a modern weir was set up. Today, the Kullerup dam has been replaced by a newer water regulation system.