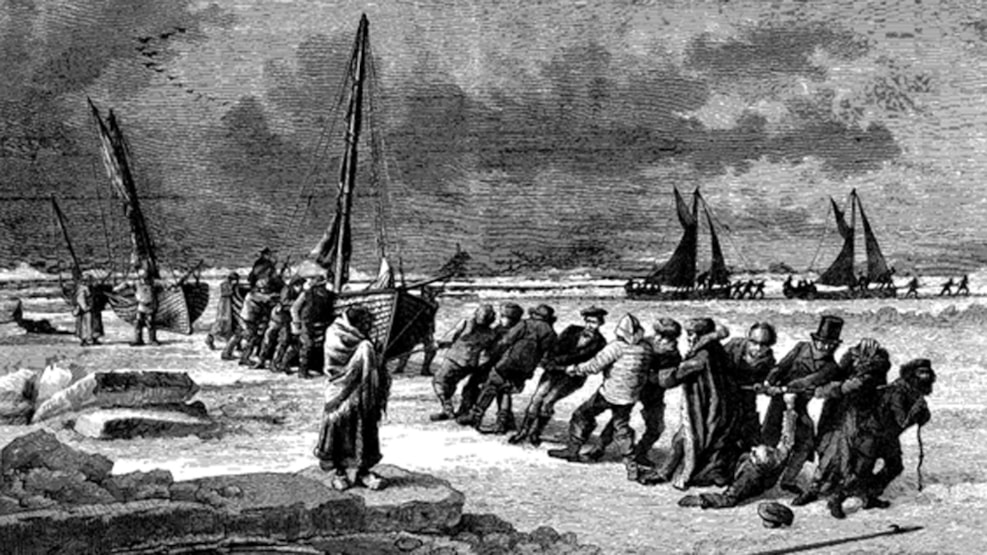 Slipshavn is Nyborg's earliest port and is first mentioned in 1446. The area has until today been home to a multitude of activities, all of which have left physical traces and left a landscape with a diverse and interesting history.

For hundreds of years there have been fortifications at Slipshavn, e.g. during the Swedish wars in the 17th century and the English war in the early 19th century, when the area had the largest gunboat base outside Copenhagen. The military engineers saw great potential in Slipshavn, and in the middle of the 17th century and in the middle of the 18th century it was proposed to move the city of Nyborg to Slipshavn for strategic reasons - however, as is well known, the plans were never implemented.

From the 15th century until 1857, foreign vessels had to pay tolls to Denmark when they passed through the belts. Guard ships at Nyborg and later Slipshavn were supposed to ensure that the customs duty was paid. In 1843, an actual customs building was built inside the rampart at Slipshavn. The customs office was converted into housing for three pilot families after the current toll was abolished. In 1974, the main pilotage station at Slipshavn was closed down and moved to Spodsbjerg, and today the old customs building is protected.

Directly opposite the customs building lived the cross customs officer and his family. The Krydstoldvæsnet was established in 1824 and had the task of preventing smuggling on merchant ships.

At Slipshavn you could also come across "The Gilded Cat", which was the area's inn. It was especially the many ships that moored at Slipshavn to pay customs that benefited from the inn's offer. However, the inn also developed into a favorite excursion destination for the citizens of Newborg, as the site had a bowling alley.

At one point, trains ran to Slipshavn. The railway was built in 1883 and ran from Nyborg to Knudshoved, where there was a stop and on to the end terminal Slipshavn. It was the icy winters that caused the railway line to be established. When Nyborg Fjord froze over, the icebreakers could not reach the ferry port in Nyborg. The plan was therefore for the icebreakers to pick up and drop off passengers at Knudshoved and Slipshavn instead. It quickly became apparent that the sailing conditions at Slipshavn were very bad when Denmark was hit by ice winters and the track section "Knudshoved - Slipshavn" was already closed in 1905, without it having been used for its original purpose. The section "Nyborg - Knudshoved" was in use until 1956. From 1928, the track was also used by bathing trains from Odense.

A hub for the military

When the winters were particularly severe, ice boats were put on the Great Belt crossing. The trip went from Knudshoved via Sprogø to Zealand. Ice boats were large rowing boats equipped with two oars so that they could be pulled across the ice. Ice boat transport was already established in 1777 and in the first half of the 19th century an ice boat station was built at Knudshoved. The ice boats were put into use for the last time in 1929 and the ice boat station closed down in 1937.

In connection with the First World War, a submarine and flying boat station was established at Slipshavn in 1916. In the interwar period, Slipshavn was used for periods by the Navy's minecraft and flying boats for exercises. But in 1939, Europe was again at war and Slipshavn formed a base for mine reconnaissance by plane and functioned as a command station for the mine barriers in the Great Belt and Little Belt.

During the occupation, approx. 2000 German soldiers arrived in Nyborg, and some of them were accommodated in newly created barracks at Slipshavn. After the war, 150 German prisoners of war were placed at the naval station and guarded by British forces. In 1956, the Marine Home Guard took over Slipshavn, and the area with its buildings is used today for administration, a course center and accommodation for the course students.

NOTE: As this is a military area belonging to the Marine Home Guard it is not possible to visit the area itself. The area can be viewed from a distance. From time to time, guided tours are organized in the area.