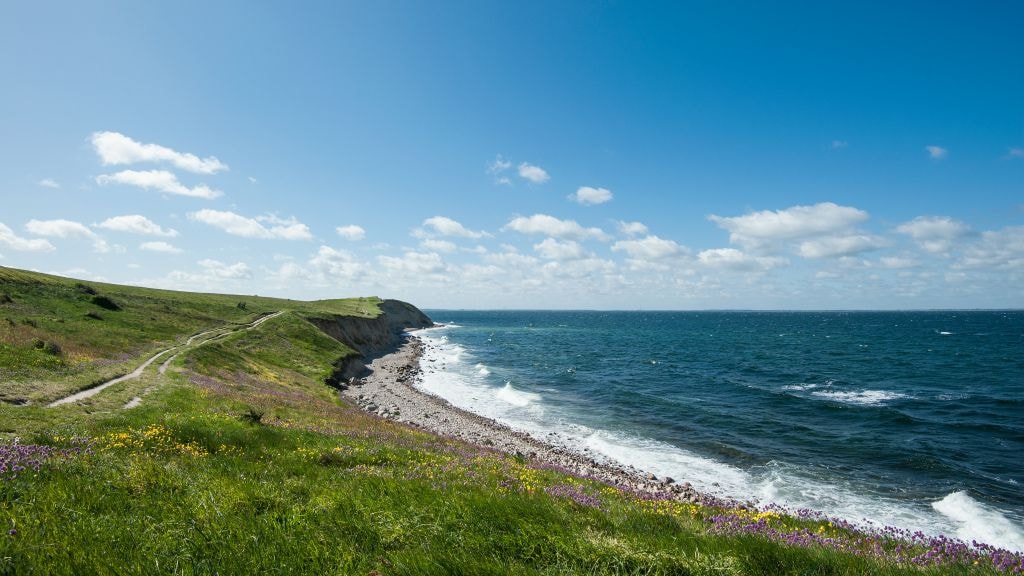 The outer part of the peninsula Hindsholm is called Fyns Hoved (Funen's Head) and belongs to the most beautiful places in Denmark. Very early man came here to live and left a great number of settlements, from which auster shells and flint tool have been excavated. The last Ice Age brought numerous sorts of stone minerals from Northern Scandinavia, and belemnities (petrified octopus) testifies the vast sea of those days. The climate is relatively dry (about 500 mm rain per year), which makes the area suitable for an interesting contingent of plants, which are not - or at least sparsely - represented in Denmark.
Species from the steps of Djengis Khan and the Central European deciduous forests form a characteristic, floral element of Hindsholm.

Part of Fyns Hoved is declared a sanctuary for wading birds and birds of prey e.g. buzzards. Also other, rare specimen can be experienced, e.g. the Glanville Fritillary butterfly (melitaea cinxia) and the natterjack toad (bufo calamita). Further: grass snakes and vipers. Whereas the grass snake is absolutely harmless, the viper, of which more than 200 have been counted, has fangs and its bite is venomous. It is stone-deaf and reacts by fleeing upon vibrations in the soil, typically footsteps. Therefore, whereas man is usually not exposed to snake bites, dogs are in greater danger. They approach much faster and do not make so much vibration. Do not be afraid of the viper but pay it your respect and keep your dog under control! The special nature of precipitation creates a unique daylight, which has always attracted painters at all seasons.

At the very far end of Fyns Hoved relicts of German fortifications form WW2 are still recognizeable. The present road, ending at the parking area is build during the war to faciliate the heavy transport needed for those fortifications.